A semiconductor test probe may also name as spring contact probe, pogo pin, spring loaded probe, this is because there is a spring mechanism in the probe.

In Maxwaytec Engineering, we focus in semiconductor test probe instead of the ordinary pogo pin.  Before we are sharing the reason, let us see what are the differences between both test probe. 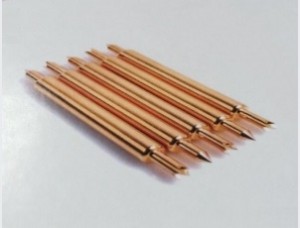 A test probe is a brass metal or stainless steel metal with gold plated, this include the music wire spring which located at the inner portion of the pin.

The tiny probe shall be installed in a dedicated socket before it install on the tester.  After the tester install with the socket, it could use to test the relevant chip,  QFD or PC board.

The difference of Semiconductor Test Probe.

There are quite a lot of parameters a test engineer to consider while come to test probe selection, however we have summarize to below 5 parameters which is the most common criteria.